I discovered this delightful article in an old Dollar Magazine and realised that the author (RM) must be Richard Malcolm and that the owner of Fleep must have been his son Dick. Sadly Dick died only weeks after bringing his pet bird back to Burnside House, Dollar. I wonder if the Oyster Catchers which have recently (and noisily) nested on the roof of Dollar Academy’s Playfair Building are descended from Fleep.
(Janet Carolan, Curator)

“Ye needna tak’ the bird inland, it winna live inland,” said the old Findhorn fisherman to my little boy; but he, dearly loving his pretty pet, and confident that with care and kindness he could preserve it, was not to be dissuaded. The “bird” was brought inland to Dollar, and thereby hangs a tale. It is fourteen years since then, and the sea-bird, a fine specimen of the male Oyster Catcher, is still alive and able to awaken the echoes with his shrill, ear-catching “fleep, fleep”.

A black-and-white bird about the size of a pigeon, with a long scarlet bill, is so striking a feature of the sea-shore, that any one who has once seen it is likely to recognise it again. It lives on sea-worms and the like, and on shell-fish which it prises open or removes from their hold upon the rocks with its chisel-tipped beak. 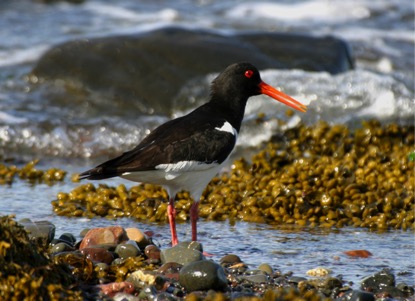 In his inland home our Fleep must miss some of these luxuries; but his tastes seem to have changed with his environment, for, with evident relish, he breakfasts and dines on the bread crumbs that fall from the table, which he never fails to call for – “fleep, fleep”- when the hour comes round. On Sunday mornings he sometimes shows much impatience. His chief food, however, consists of worms, and it is very interesting to watch his dexterity in finding them. His eye is very quick in detecting the slightest movement in the soil, for he rarely thrusts in his long beak without bringing up a worm, which he carefully washes in his basin and then swallows.

Exemplary in the matter of cleanliness is this little bird! He never misses his morning bath. He has a very funny way of swilling the water over his body; he first dips his head under the water, then jerks it up quickly, and in this way he throws the water over all his feathers. 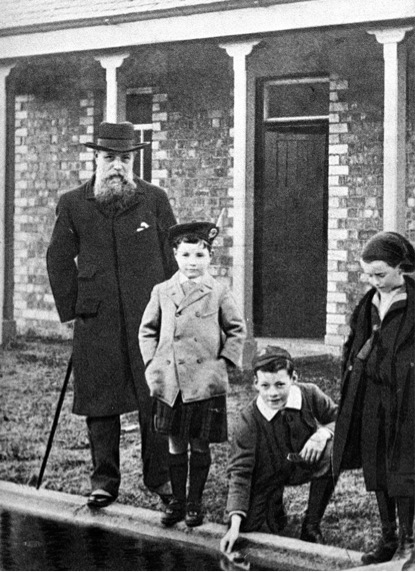 He tolerates the presence of the house cat, but, should a stranger puss appear on the garden wall, he raises a commotion intended to alarm the inmates of the house and apprise them that a dreaded enemy is approaching. To keep him safe from these prowlers, he is every night shut up in his little hutch, and, should he by any mistake be forgotten, he soon lets it be known. At times, however, he will cunningly and quietly conceal himself among the bushes or under the cabbages, as if he would say, “You have come too soon, I do not wish to go to bed yet.” When the hens are let loose he mingles with them; but looks upon them as if they were mere tenants at will and he as landlord.

In this bird with all his early associations, there is something inexpressibly dear to me; and I should feel towards any one who injured him, as the messmates of the Ancient Mariner did towards him after he had shot the albatross. Sure am I, that in this world he does more good than harm, and of how many featherless bipeds can this be said?

Perched on his gravestone is not an oyster catcher but a dove.

Note: Information about Dick Malcolm can be found in the section on ‘Dick’ in the Lavinia Malcolm story.